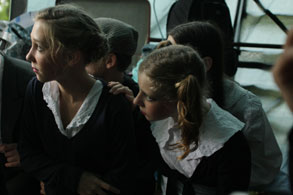 The International Theatre Academy for Children was founded in France in 1986 following the shooting of a film upon the meeting of different peoples : « The Future of Mankind in the eyes of a child » – « Tshil Nuitsheuakan ». This film was shot with 400 Amerindians, Canadians and French acting children. The International Theatre Academy for Children cherishes its vocation to enable children of different cultural and social origins to meet together and to open themselves to the adventure of an artistic creation.