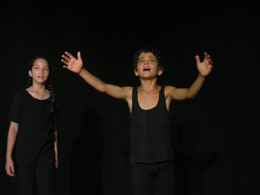 At the Academy we learn how to be happy as individuals and together in groups, as adults and as children. Theatre makes this apprenticeship possible, in the sense that it invites each one to exercise his or her creative mind. What is this creative mind? An attitude toward life, “a mode of perception which gives an individual the feeling that life is worth living,” according to the words of the psychologist Donald W. Winnicott: The creative state par excellence is that of the game of life in which a person feels free to use his or her entire personality. “It is in playing and only in playing that the individual child or adult is able to be creative and to use the whole personality, and it is only in being creative that the individual discovers the self.”

"Theatre is playing and working at the same time,
that is what I love
."

The child loves work when it calls upon his creativity, not because it would be less demanding but because it permits him all the more to become himself.

"If you donâ€™t want to work, thereâ€™s no use coming to the Academy."