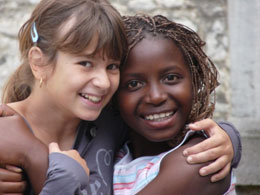 ALGERIA: stages for children and creation of plays with the Compagnie El Moudja in Mostaganem since 2009. Participation in the national festival of school theater organized by the Direction de l’Education de Mostaganem in 2010.

ANGOLA: training workshops for children and schooling of coaches with the Association Globo Dikulu in Cazenga (Luanda) since 2009.
orladom@live.com.pt

BELGIUM: schooling of coaches with the city of Namur in 2008.

LEBANON: theater workshops for children and creation of plays in Palestinian camps by the Collectif Kahraba.
aurelienzouki@gmail.com

PORTUGAL: creation of an International Theatre Academy for Portuguese speaking children, with actors from Lisboa since 2013.

QUEBEC (CANADA): Co-production and co-direction of the movie "The Future of Mankind in the eyes of a child" (shot with 400 acting children, as well Native, Quebec and French) with the Amerindian community of Pessamit in Quebec, 1985-87.
www.pessamit.ca.