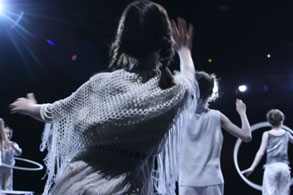 "The character is like a phantom.
The phantom came to me...
At the beginning of the play I got the shivers,
and then the character came...
It did its work, I did mine...
I let my body be invaded by the character.

The child carries within himself the entire range of human sentiments: love, anger, joy, sadness... even if he is not yet capable of grasping the psychological complexities of a theatrical character conceived by an adult. In our tales or myths and in certain dramatic authors we find characters who are archetypes of humanity, bearers of universal sentiments that the child is able to share.

The child makes a very clear distinction between his character and himself. Playing a character is in a very real sense to encounter and to love an “other”.  Paradoxically, playing a role on a stage to go beyond the role he plays in society, to pass from seeming to being.

"Acting is to discover oneself, to learn how to be oneself."

It is the depth of any human relationship that he discovers, through the relationship he enters into with his character. The stage is the site of an apprenticeship in human understanding and altruism.